What began as a book blog has evolved into something far more amorphous as the busy pace of my life has accelerated almost beyond my control.  These days I have less time for sharing my thoughts about books than I did 2 years ago so am much more likely to post brief thoughts about multiple books in a single post.  As you’ll see if you hang around to read the post that follows this one, I’m also far more likely to blog about what’s going on in my world or in the tiny bit of the WordPress community I’ve staked out as my own.

Since my last post on 5/17/18, I’ve been frantically trying to get caught up at work before we leave for vacation next week.  But my recently-developed addiction to blogging compels me to post today.  The work will still be there after I accomplish this.

I’ve missed y’all, can’t wait to take a look at your blogs, and am eager to hear from you. 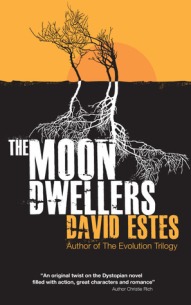 The Moon Dwellers (The Dwellers #1), fiction, by David Estes

I rated this book 2 of 5 stars, “It was OK”, on Goodreads.  You can read the book’s synopsis there by clicking on the title.

After reading an enthusiastic review of The Moon Dwellers written by a Goodreads friend and fellow blogger then reading numerous glowing reviews about the book and the series on Goodreads, I was excited to read it in the hope it would be something I could recommend to The Girl that we could then enjoy hours of discussion over and have some new inside jokes to share.

Alas, it wasn’t meant to be.  I make it a personal point of pride not to trash books or authors who self-publish or publish through small, obscure, and/or independent publishers, so I’ll limit my criticism here.  I want to be supportive of authors trying to break out and make it. But because The Moon Dwellers has been so frequently raved about, I feel I have an obligation to list my concerns.

The world Estes created is plausible enough but is rather bland and poorly fleshed-out. Nothing really sets it apart from other recent dystopian YA worlds except that it’s set underground.

The same can be said for the characters.  Yes, there are minor differences from one character to the next, but they all share the same basic set of personality traits, and most of their personalities are inconsistent and variable, as if Estes can’t settle on exactly who he wants each character to be.  The few characters that remain consistent are flat, stock, minor characters.  There is entirely too much internal narrative going on with the twin protagonists, Adele and Tristan, and so little differentiation that at times it’s easy to forget which one’s viewpoint is on display.  Estes tells way more than he shows.

I was also put off by the plot development and pacing.  The Moon Dwellers would be a stronger book if it were shorter and got to the point faster.

SPOILERS FOLLOW! The most disappointing thing about the book for me is that the central plot point for this book, as opposed to the series as a whole, is left unresolved. The main driver of the story here is the physical pain that Adele and Tristan experience when they touch, lock gazes, or are in close proximity to each other, and each spends so much time thinking about it and wondering what causes it that it almost consumes everything else.  Is it just the usual physical symptoms experienced by a young couple in love?  Is it something else, something bigger?  Is it something spiritual or mystical?  Is it, (gasp!) Destiny?

I understand the need to create suspense going into the next book in the series, but by the end of The Moon Dwellers, Estes has already established other, more appropriate cliffs from which to hang.  Who is supporting the Star Dwellers’ assault upon the Moon Dwellers and why?  Is Adele’s Mom still alive, and if so, will Adele be able to find and rescue her?  I was so disappointed by Estes’ failure to resolve the book’s central plot point, which was the one thing that kept me reading when I was ready to quit multiple times, that I was soured on the rest of the series.  I just don’t care enough about the characters and their plight to make myself suffer through 2 (or 5) more books.

In my final analysis, The Moon Dwellers isn’t bad, but it’s far from good. It’s just mediocre. Goodreads does it a major disservice by including it on a list with such towering exemplars of the genre as The Hunger Games and Divergent.

I rated this book 4 of 5 stars, “Really liked it”, on Goodreads.  You can read the book’s synopsis there by clicking on the title.

This massive biography took me more than a month to listen to.  Scott Brick does an admirable job of narrating with steady pacing and decent tonal modulation, so it never became boring or monotonous.

Chernow did an excellent job of researching an encyclopedic range of primary sources and a masterful job of weaving so many details of Washington’s life together into an enlightening and entertaining cradle-to-grave narrative.  At many points throughout the book, the writing is almost cinematic, and I could picture episodes of Washington’s life in clear visual scenes.  The story often reads like a novel.  I had to borrow the book from my awesome local public library because I wanted to look up some of the source material used to support certain opinions of Washington’s, especially those relating to what this First of our Founding Fathers really believed about our Constitution.

If you’re interested in the lives of the great people who founded America and fostered it through its painful birth, and if you have the time to devote to a detailed telling, you won’t want to miss Chernow’s Washington: A Life.  There is so much more to the man than the few, often distorted, details we’re taught about him in our elementary and high school history courses and the one-sided portraits presented by his early biographers and modern political partisans.

Now it’s on to some lighter, fictional, fare, and a long-overdue re-read of an old favorite…