Hey y’all!  I hope you’re doing well on this fine Friday.  With this post, I’m happy to say, I’m caught up on my book reviews, which, of course, only comes after being caught up at work.  If the political situation weren’t so hopeless in America right now, I’d be tempted to say I’m content.  Ah, well.  At least I still have hope and haven’t completely given in to despair.

I already posted these reviews on Goodreads.  If y’all’re interested in reading either of the synopses, just click the linked titles below.  And if you’ve read either of these books, I’d love to hear what you think in my Comments section.  You know, way down yonder at the bottom. 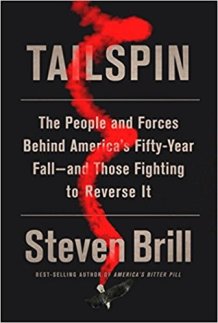 Tailspin: The People and Forces Behind America’s Fifty-Year Fall–and Those Fighting to Reverse It by Steven Brill.  I rated it 4 of 5 stars, “really liked it” on Goodreads and shelved it there as American, educational, government, history, nonfiction, political issues, public institutions, and scholarly.

I’ll tell y’all right up front this review doesn’t do the book justice. Tailspin is so full of good information that I’d have to read it, carefully, 3 or 4 times to fully digest it.

I frequently complain that subtitles tend to be misnomers and that they seem to be designed to catch eyes and sell books more than to give an accurate impression of what the book’s about, but the opposite is true here. The People and Forces Behind America’s Fifty-Year Fall–and Those Fighting to Reverse It basically says it all. That’s exactly what Tailspin is: an honest, accurate, deeply-researched, carefully thought out, and well-documented profile of the individuals who and agencies and corporations that have promoted and caused various policy changes from 1967 through 2017; why they did it, how they did it; and the consequences, positive and negative, intended and unforeseen, of the changes they succeeded in bringing about.

Author Steven Brill is fair and even-handed in assigning blame and credit. Unlike some political authors, (I’m talking about you, Ann Coulter and Matt Taibbi, et al) Brill does not comes across as shrill, apoplectic, or disgusted. Even when profiling people and decisions he clearly disagrees with or despairs of, Brill presents that person’s reasoning fairly, accurately, and without undue condemnation.

The best part of Tailspin is that Brill spends almost as much time and space profiling the individuals and agencies who are working today to bring about positive change. He takes pains to describe their ideas in detail, to offer references to their proposals, and to make suggestions for what readers, who may have little time to engage in activism or to work actively to bring about change, can do in their own small way to work for change.

Tailspin offers encouragement throughout and ends on a hopeful note. It should be required reading for high school and college political science courses, and every American citizen who’s worried about the future of our country and is interested in helping bring about change but has no idea what to do about it should read this book. 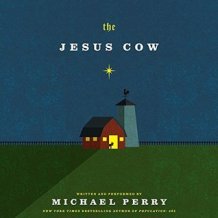 The Jesus Cow, audiobook version, written and narrated by Michael Perry.  I rated it 4 of 5 stars, “really liked it” on Goodreads and shelved it there as American and fiction.

As I hinted in my review of Perry’s memoir Montaigne in Barn Boots, I could listen to him read all day. I enjoyed The Jesus Cow almost as much and was sorely tempted to award it 5 stars but couldn’t quite convince myself to do it. I resolved not too long ago to rate materials as objectively as possible no matter how much I like the author and his or her previous works, and as much as I liked this book, I can’t claim it’s flawless.

For the most part, the characters in the book are realistic and nicely fleshed out, and their interactions and conversations flow pretty naturally. I’ve read other reviews that complain most of the characters are little more than stock characters or archetypes and some of their scenes seem to come directly from central casting, and I can’t entirely disagree; some characters are and some scenes do.

The story is so tightly (another reviewer said transparently) plotted that the climactic conflagration and the dissolution of a major romantic entanglement are entirely predictable. A few lengthy sections of the novel tend to tell more than show, which of course violates one of the top rules of modern writing workshops. That didn’t bother me so much because it serves to give deep insight into character history and motivation without having to expend pages and pages on flashbacks or intricately blocked scenes to show what happened.

Two things Perry does very well are paint a clear and wholly believable picture of a modern rural Midwestern American town and of the conflicts typical in such towns. Another strength is his sense of humor and his obvious compassion for all types of people. To read The Jesus Cow is to see an author who sees the essential dignity of all his fellow humans. There are also a few pleasant surprises in the epilogue that I didn’t see coming.

I was tempted to rate The Jesus Cow 5 stars because Perry is such an entertaining narrator, his characters have funny and sometimes profound, searching conversations, and his personal philosophy, as revealed in his writing anyway, seems so closely aligned with mine. In the end, I had to remind myself that those qualities only carry that much weight with me, and that the book’s weaknesses would probably keep others from liking it as much as I did. Hell, it may only deserve 3 stars, but I didn’t have the heart to deprive it of one more.