I already posted these reviews on Goodreads, so they’re well-burnished.  If y’all’re interested in reading either of the synopses, click the linked title below the image of the book’s cover.  And if you’ve read either of these books, I’d love to hear what you think in my Comments section.  You know, way down yonder at the bottom.

The Handmaid’s Tale by Margaret Atwood.  I rated it 3 of 5 stars, “liked it”, on Goodreads and shelved it there as dystopian, sci-fi, series, & novel.

With a hold placed on its brand-new sequel The Testaments at my awesome Nashville Public Library, I reckoned I’d better re-read this classic from my high school days. I remember liking it then but not being much moved by it; I didn’t find it scary because it was so implausible.  Oh me, oh my, how my opinion has changed.

With believable characters, good plot & pacing, and plenty of intrigue and suspense, this is a good tale well-told, and I think it ought to be made required reading for high school juniors or seniors.

The Handmaid’s Tale is a different story in 2020 than it was in 1985 because we’re living in a different country. We’ve already ceded control of all three branches of our federal government to the corporations while allowing our majority Christian population to portray itself as a persecuted minority and thereby gain a much firmer grip on our governmental policy apparatus and federal law, so the story is much, much more frightening because it seems that much more plausible. I haven’t the teeniest, tiniest bit of trouble imagining now that an organized, well-armed, militant, repressive, fundamentalist Christian sect could, with relative ease and speed, pull off a coup and accomplish a successful secession within a very short period of time.

And y’all, that scares the shit outta me! 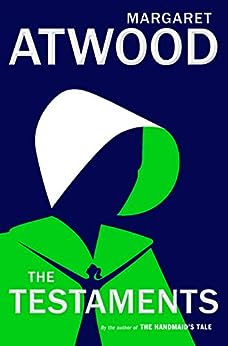 The Testaments by Margaret Atwood.  I rated it 3 of 5 stars, “liked it”, on Goodreads and shelved it there as dystopian, sci-fi, series, & novel.

I enjoyed The Testaments quite a lot. Margaret Atwood hasn’t lost a step. It features 3 strong but very different female protagonists, a clear line of continuity from its predecessor, and a welcome and thorough expansion of the world of Gilead and the history of how it came to be. It has a steady, clear plot, plenty of action, intrigue, & treachery, and a good look behind the scenes of Gilead’s inner workings. My only complaint is that there are no surprises. I figured out very early who the protagonists are in relation to the story at large and what roles they would play, so any expected plot twists failed to catch me off guard. Yes, it still leaves many questions unanswered, but I can live with that. It seems to me we can look at American headlines of the last 30 years for clues as to how an embittered minority of conservative evangelical Christians were able (may soon be able) to consolidate power, amass arms, and stage an effective coup on a corrupt corporatocracy that long ago ceased effectively to serve the needs of its several struggling or most vulnerable constituencies.

I’ve seen quite a few critical comments on Goodreads; “What’s the point of this book?”; “Why did Atwood write this?”; “This has all the elements of bad YA dystopian fiction!”; etc., etc., and I don’t understand them. Yes, The Testaments is a sequel, but that doesn’t mean we can expect it to be written in the same style or even be the exact same genre. The Handmaid’s Tale was literary sci-fi that was ahead of its time and written long before the popularity of the YA genre of books & film exploded. After the success of the T.V. version of the The Handmaid’s Tale, Atwood must have surveyed the state of pop culture today and reckoned she could cash in on the YA novel & film craze and that the market could accommodate her sequel as a new entry. Why envy her that? As long as the book is well-written, engaging, and entertaining, more power to her. And it most certainly is all three of those things. Here’s hoping Hollywood can get the film version(s) right…

Have y’all read The Handmaid’s Tale and The Testaments?  What did you think about them?  Atwood is a prolific author; have you read any of her other books or series?  Tell me about it, please, so I can figure out what of hers to read next!