Holy crap, y’all!  I just browsed through my Goodreads “My Books” section and realized I’ve posted thoughts on 17 books there without also sharing them here.  17!  Shameful!  I deserve a kick in the pants for such a lapse.

I was already planning to squeeze in a couple of posts this week, but this delightful discovery supplies me with ample ammunition for at least a couple weeks’ worth of new material for your reading pleasure!

I already posted these reviews on Goodreads.  If y’all’re interested in reading either of the synopses, click the linked title below the image of the book’s cover.  And if you’ve read either of these books, I’d love to hear what you think in my Comments section.  You know, way down yonder at the bottom.

Don Quixote by Miguel de Cervantes Saavedra, translated from Spanish by John Rutherford.  I rated it 4 stars, “really liked it” on Goodreads & shelved it there as classics, fiction, literary, novel.

I don’t know how I managed to avoid reading Don Quixote ’til my 49th year, but it was well worth the wait. I laughed on every page and cried almost as often. A hilarious, absurd send-up of the chivalric novel genre. There’s a reason this masterpiece has endured for over 400 years.  If you haven’t read it yet, please do.  If you’re not averse to cuddling with a 1,000-page masterpiece, I’m sure you won’t regret it. 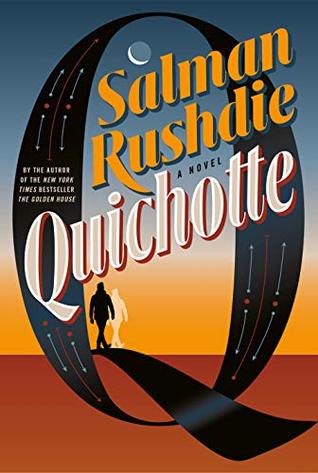 Quichotte by Salman Rushdie.  I rated it 4 stars, “really liked it”, on Goodreads and shelved it there as favorites, fiction, literary, magical realism, & novel.

Quichotte is the first (and to date only) Goodreads Giveaway that I entered and won. There aren’t too many authors more suited to my literary tastes who would’ve made a better first win, and Rushdie doesn’t disappoint. He’s long been one of my favorites, and he’s at the top of his game here. I don’t know how many authors writing today have the gumption to tackle a classic that looms as large in the Western Canon as Don Quixote does. Rushdie is one of the few who could take it on an succeed as well as he has.

While Quichotte isn’t quite as hilarious as Don Quixote is, it’s classic Rushdie, a bundle of story within story within story. It’s full of realistic, relatable characters and spot-on settings, and it gets to the heart of its characters’ desires as well as the absurdity of our modern world. This is one I would’ve paid money to own, but winning a freebie makes it that much sweeter.

Have y’all read Don Quixote or Quichotte?  What did you think about them? Did Rushdie do the Don justice, or do you prefer the original?

Thanks for stopping by & especially for reaching out.  Take care, be well, & happy blogging!